When world renowned Buddhist writer Stephen Batchelor turned sixty, he took a sabbatical from his teaching and turned his attention to solitude, a practice integral to the meditative traditions he has long studied and taught. He aimed to venture more deeply into solitude, discovering its full extent and depth.


This beautiful literary collage documents his multifaceted explorations. Spending time in remote places, appreciating and making art, practicing meditation and participating in retreats, drinking peyote and ayahuasca, and training himself to keep an open, questioning mind have all contributed to Batchelor’s ability to be simultaneously alone and at ease. Mixed in with his personal narrative are inspiring stories from solitude’s devoted practitioners, from the Buddha to Montaigne, from Vermeer to Agnes Martin.

In a hyperconnected world that is at the same time plagued by social isolation, this book shows how to enjoy the inescapable solitude that is at the heart of human life.
Stephen Batchelor is a teacher and scholar of Buddhism. He is the author of numerous works, including Buddhism Without Beliefs, Living with the Devil, Confession of a Buddhist Atheist, Secular Buddhism, and After Buddhism.

Who Cares Wins. Reasons for Optimism in Our Changing World, av Lily Cole

Many people perceive this to be a moment of despair. Global warming has reached terrifying heights of severity, human expansion has caused the extinction of countless species and neoliberalism has led to a destructive divide in wealth and a polarization of mainstream politics. But, there are constructive ways to meet these challenges, and there are plenty of reasons for optimism.

Lily Cole has met with some of the millions of people around the world who are working on solutions to our biggest challenges and are committed to creating a more sustainable and peaceful future for humanity. Exploring issues from fast fashion to fast food and renewable energy to gender equality, and embracing debate, the book features interviews with diverse voices from entrepreneurs Stella McCartney and Elon Musk, to activists Extinction Rebellion co-founder Dr Gail Bradbrook and Farhana Yamin, to offer a beacon of possibility in challenging times.

Who Cares Wins is a rousing call to action that will leave you feeling hopeful that we can make a difference. We are the ancestors of our future: a generation that will either be celebrated for its activism or blamed for its apathy. It is for us to choose optimism, to make changes and to create the future we want. 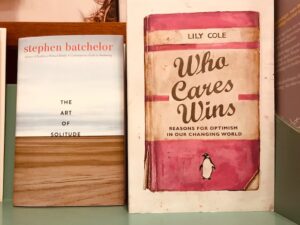 The Hungarians. A Thousand Years of Victory in Defeat, av Paul Lendvai

Win. If You Lose You Die, av Harlan Coben

A Theory of the Aphorism. From Confucius to Twitter, av Andrew Hui