A thirteen-year-old girl watches her white best friend totter along the edge of a building roof; a woman who lost her child in its first trimester finds empathy and horror in the waters of a city aquarium; a mother protects her teen daughter from a predatory love interest by taking revenge over a very French supper; and two estranged siblings take a road-trip with their dead father’s ashes – rediscovering one another and reckoning with all the ways that trust can be betrayed and love can be redeemed.

Set in the suburbs and the cities of the modern world but about the ancient essences of who and what we are, Milk Blood Heat is a collection of love and sex, birth and death. Through the stories of ordinary characters confronted by extraordinary moments of violent yet often beautiful reckoning, Dantiel W. Moniz contemplates human connection, race, womanhood, inheritance, and the elemental darkness in us all. Wise and subversive, spiritual and seductive, Milk Blood Heat showcases that the world in which we live can be a place of obstacles and heartbreak… but also one of grace and splendour.

Dantiel W. Moniz is the recipient of the Alice Hoffman Prize for Fiction, the Cecelia Joyce Johnson Emerging Writer Award by the Key West Literary Seminars, and a Tin House Scholarship. Her fiction has appeared or is forthcoming in theParis Review, Tin House, Ploughshares, American Short Fiction, Yale Review, One Story, McSweeney’s Quarterly Concern and elsewhere. Milk Blood Heat is her first book. She lives in Northeast Florida.

Edie is just trying to survive. She’s messing up in her dead-end admin job in her all-white office, is sleeping with all the wrong men, and has failed at the only thing that meant anything to her, painting. No one seems to care that she doesn’t really know what she’s doing with her life beyond looking for her next hook-up. And then she meets Eric, a white, middle-aged archivist with a suburban family, including a wife who has sort-of-agreed to an open marriage and an adopted black daughter who doesn’t have a single person in her life who can show her how to do her hair.

As if navigating the constantly shifting landscape of sexual and racial politics as a young black woman wasn’t already hard enough, with nowhere else left to go, Edie finds herself falling head-first into Eric’s home and family.

Razor sharp, provocatively page-turning and surprisingly tender, Luster by Raven Leilani is a painfully funny debut about what it means to be young now.

Raven Leilani’s work has been published in Granta, McSweeney’s Quarterly Concern and The Cut, among other publications. Leilani received her MFA from NYU and is currently the Axinn Foundation Writer in Residence there. Luster is her first novel. 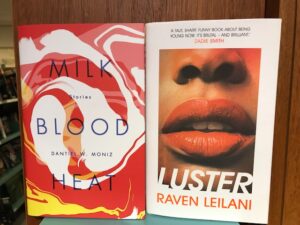