A stunningly ambitious and entertaining novel that gives us a counter-factual history of the modern world, from the author of the international bestseller HHhH.

Freydis is the leader of a band of Viking warriors who get as far as Panama. Nobody knows what became of them…
Five hundred years later, Christopher Columbus is sailing for the Americas, dreaming of gold and conquest. Even when captured by Incas, his faith in his superiority and his mission is unshaken.

Thirty years after that, Atahualpa, the last Inca emperor, arrives in Europe. What does he find? The Spanish Inquisition, the Reformation, capitalism, the miracle of the printing press, endless warmongering between the ruling monarchies, and constant threat from the Turks.

But most of all, downtrodden populations ready for revolution. Fortunately, he has a recent guidebook to acquiring power – Machiavelli’s The Prince. It turns out he is very good at it. So, the stage is set for a Europe ruled by Incas and, when the Aztecs arrive on the scene, for a great war that will change history forever.

Civilisations is a wildly entertaining counterfactual story about the modern world, colonisation, empire-building and the eternal human quest for domination. It is an electrifying novel by one of Europe’s most exciting writers. 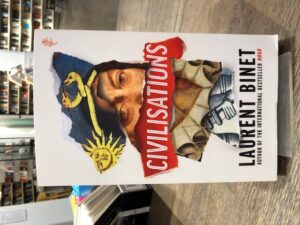 Keats. A Brief Life in Nine Poems and One Epitaph, av Lucasta Miller