A collection of delicious modern recipes from Siberia and beyond.

Salt & Time will transform perceptions of the food of the former Soviet Union, and especially Siberia–the crossroads of Eastern European and Central Asian cuisine–with 100 inviting recipes adapted for modern tastes and Western kitchens, and evocative storytelling to explain and entice. Why not try the restorative Solyanka fish soup (a famous Russian hangover cure), savor the fragrant Chicken with prunes or treat yourself to some Napoleon cake.

” Often we need distance and time, both to see things better and to feel closer to them. This is certainly true of the food of my home country, Russia–or Siberia, to be exact. When I think of Siberia, I hear the sound of fresh snow crunching beneath my feet. Today, whenever I crush sea salt flakes between my fingers as I cook, I think of that sound. In this book, I feature recipes that are authentic to Siberia, classic Russian flavor combinations and my modern interpretations. You will find dishes from the pre-revolutionary era and the Soviet days, as well as contemporary approaches–revealing a cuisine that is vibrant, nourishing, exciting and above all relevant no matter the time or the place.”

Alissa Timoshkina is a chef, curator and supper club host with a PhD in film history. For years Alissa lectured and published on the subject of Russian and European cinemas, and also worked as curator and coordinator of film festivals in London. However, her passion for cooking and hosting dinner parties gradually turned into an obsession and Alissa left her job to launch a new project: a cinema-supper club called KinoVino, which offers film screenings and sit-down dinners with unique menus inspired by the films. Since its launch in May 2015, KinoVino has established a reputation as one of London’s most original projects, redefining the local food and film scene. 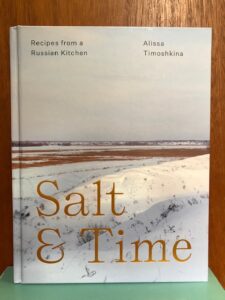 Walter Kempowski: All for Nothing