In Yiddish Writers in Weimar Berlin, Marc Caplan explores the reciprocal encounter between Eastern European Jews and German culture in the days following World War I. By concentrating primarily on a small group of avant-garde Yiddish writers—Dovid Bergelson, Der Nister, and Moyshe Kulbak—working in Berlin during the Weimar Republic, Caplan examines how these writers became central to modernist aesthetics. By concentrating on the character of Yiddish literature produced in Weimar Germany, Caplan offers a new method of seeing how artistic creation is constructed and a new understanding of the political resonances that result from it.

Yiddish Writers in Weimar Berlin reveals how Yiddish literature participated in the culture of Weimar-era modernism, how active Yiddish writers were in the literary scene, and how German-speaking Jews read descriptions of Yiddish-speaking Jews to uncover the emotional complexity of what they managed to create even in the midst of their confusion and ambivalence in Germany. 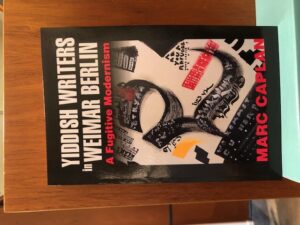 Tio i topp. Deckare i pocket