The catalogue accompanying the blockbuster exhibition at The National Gallery, London, which The Guardian has called ’epochal’ and ’superbly curated’

Artemisia Gentileschi (1593–1654 or later) is the most celebrated woman artist of the baroque period in Italy. Her career spanned more than 40 years, as she moved between Rome, where she was raised and trained by her father, Orazio Gentileschi, to Florence, where she gained artistic independence and became the first female member of the city’s academy of artists, and to Venice, London, and Naples. Often featuring heroic female subjects, her paintings were predominantly intended for private clients. Today they are recognized for their dramatic power and originality, showing Artemisia to be one of the most compelling storytellers of her time.

This beautiful book includes essays on her life and career; a discussion of her personal and artistic relationship with her father; a summary of critical writings and an overview of the wide range of approaches to Artemisia’s work since her rediscovery by feminist art historians more than 50 years ago; a more personal insight into Artemisia through her letters; a discussion of the artist’s self-representation in her work; and an essay dedicated to her painting technique. 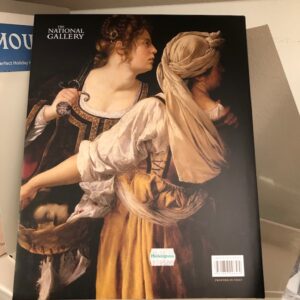