Jed Z. Buchwald & Diane Greco Josefowicz: The Riddle of The Rosetta. How an English Polymath and a French Polyglot Discovered the Meaning of Egyptian Hieroglyphs

In 1799, a French Army officer was rebuilding the defenses of a fort on the banks of the Nile when he discovered an ancient stele fragment bearing a decree inscribed in three different scripts. So begins one of the most familiar tales in Egyptology—that of the Rosetta Stone and the decipherment of Egyptian hieroglyphs. This book draws on fresh archival evidence to provide a major new account of how the English polymath Thomas Young and the French philologist Jean-François Champollion vied to be the first to solve the riddle of the Rosetta.

Jed Buchwald and Diane Greco Josefowicz bring to life a bygone age of intellectual adventure. Much more than a decoding exercise centered on a single artifact, the race to decipher the Rosetta Stone reflected broader disputes about language, historical evidence, biblical truth, and the value of classical learning. Buchwald and Josefowicz paint compelling portraits of Young and Champollion, two gifted intellects with altogether different motivations. Young disdained Egyptian culture and saw Egyptian writing as a means to greater knowledge about Greco-Roman antiquity. Champollion, swept up in the political chaos of Restoration France and fiercely opposed to the scholars aligned with throne and altar, admired ancient Egypt and was prepared to upend conventional wisdom to solve the mystery of the hieroglyphs.

Taking readers from the hushed lecture rooms of the Institut de France to the windswept monuments of the Valley of the Kings, The Riddle of the Rosetta reveals the untold story behind one of the nineteenth century’s most thrilling discoveries.

Jed Z. Buchwald is the Doris and Henry Dreyfuss Professor of History at the California Institute of Technology. He lives in Altadena, California. Diane Greco Josefowicz is a writer, editor, and activist. She has served for more than a decade as science and technology editor for the Victorian Web (victorianweb.org).

Julius Caesar, Augustus, Tiberius, Caligula, Claudius, Nero – these are the men who mastered ancient Rome and changed it from a democracy to a personal possession. Their lives, their struggles for and grandiose displays of power have provided some of the most dramatic moments in ancient history. After the assassination of Julius Caesar, his adopted heir Octavian rose to power and reinvented himself as the Emperor Augustus. The Julio-Claudian house ruled for almost a century, but their time was filled with tragedy, conspiracy and murder.

Set against a background of foreign wars and domestic intrigue, the story of Rome’s greatest dynasty is also the story of the birth of an imperial system, the impact of which has shaped Europe’s history all the way up to the present day. 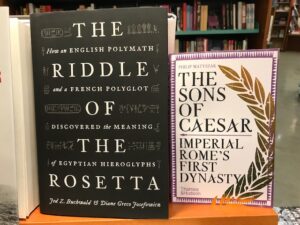 The Riddle of the Rosetta är inbunden. The Sons of Caesar är i pocket.