After walking out on his wife to shack up with ’Brexit Brenda’ next door, George Pantis thinks he’s got it made – especially when he wins millions on a Kosovan lottery he barely remembers entering.

Unfortunately, he can’t access the money because he’s forgotten his password. What is he meant to tell all the forceful people who keep appearing at his doorstep desperate to know his mother’s maiden name?

The situation is shadier than he thinks, and George is need of rescue. But will his dysfunctional family be able to save him, and in the process, can they save each other?

Marina Lewycka was born in Kiel, Germany, after the Second World War, and moved to England with her family when she was about a year old. Her first novel, A Short History of Tractors in Ukrainian, has sold more than a million copies in the UK alone and was shortlisted for the Women’s Prize for Fiction, longlisted for the Man Booker and won the Bollinger Everyman Prize for Comic Fiction and the Waverton Good Read Award. Her second novel, Two Caravans, was shortlisted for the Orwell Prize. A Short History of Tractors in Ukrainian, Two Caravans and Marina’s third and fourth novels, We Are All Made of Glue, Various Pets Alive and Dead and The Lubetkin Legacy are all available in Penguin. Marina Lewycka lives in Sheffield. 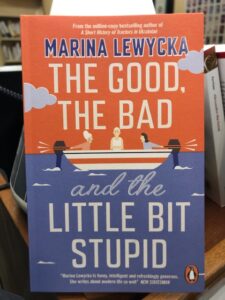 Julian Barnes: The Only Story