An award-winning poet and philosophy professor reveals the history of the German idealist oasis where discussions of revolution, literature, beliefs, romance, and concepts gave birth to the modern world.

Around the turn of the nineteenth century, a steady stream of young German poets and thinkers coursed to the town of Jena to make history. The French Revolution and the Napoleonic Wars had dealt a one-two punch to the dynastic system. Confidence in traditional social, political, and religious norms had been replaced by a profound uncertainty that was as terrifying for some as it was exhilarating for others. Nowhere was the excitement more palpable than among the extraordinary group of poets, philosophers, translators, and socialites who gathered in this Thuringian village of just four thousand residents.

Jena became the place for the young and intellectually curious, the site of a new departure, of philosophical disruption. Influenced by Johann Wolfgang von Goethe, then an elder statesman and artistic eminence, the leading figures among the disruptors—the translator August Wilhelm Schlegel; the philosophers Fritz Schlegel and Friedrich Schelling; the dazzling, controversial intellectual Caroline Schlegel, married to August; Dorothea Schlegel, a poet and translator, married to Fritz; and the poets Ludwig Tieck and Novalis—resolved to rethink the world, to establish a “Republic of Free Spirits.” They didn’t just question inherited societal traditions; with their provocative views of the individual and of nature, they revolutionized our understanding of freedom and reality.

With wit and elegance, Peter Neumann brings this remarkable circle of friends and rivals to life in Jena 1800, a work of intellectual history that is colorful and passionate, informative and intimate—as fresh and full of surprises as its subjects. 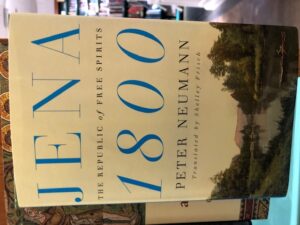