Harry Sidebottom: The Mad Emperor Heliogabalus and the Decadence of Rome

Harry Sidebottom: The Mad Emperor Heliogabalus and the Decadence of Rome

Varius Avitus Bassianus, known to the modern world as Heliogabalus, was proclaimed emperor. The next four years were to be the strangest in the history of the empire.

Heliogabalus humiliated the prestigious Senators and threw extravagant dinner parties for lower-class friends. He ousted Jupiter from his summit among the gods and replaced him with Elagabal. He married a Vestal Virgin – twice. Rumours abounded that he was a prostitute. In the first biography of Heliogabalus in over half a century, Harry Sidebottom unveils the high drama of sex, religion, power and culture in Ancient Rome as we’ve never seen it before.

Dr Harry Sidebottom teaches Ancient History at Lincoln College, Oxford. Since publication of Fire in the East in 2008, he has written and published a novel each year, all of which have been Sunday Times top 5 bestsellers. His Warrior of Rome series has been published in 14 countries. Harry is also the editor of the Blackwell Encyclopaedia of Ancient Battles. 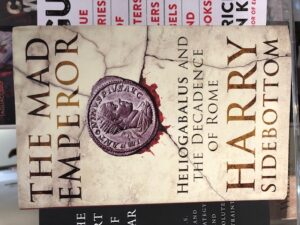 Own it. The Secret to Life, av Diane von Furstenberg

Kenneth Grahame: The Wind in the Willows